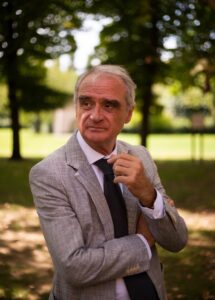 Aldo Cicconofri graduated in Singing (teaching branch) and in Choral Music and Choir Direction at the L. Cherubini Conservatory in Florence. He taught at the Conservatories of Foggia and Perugia and concluded his teaching activity at the Conservatorio “G. Rossini” in Pesaro, where he held the courses of Choral Practices, Performance Practices (for the Biennial Course of Choral Conducting), Choral Formation and supervised the preparation of the Children’s Choir. He participated as a member of the Commission at the last Competition for Italian Conservatories and has been working for many years as a Choir Director collaborating with various formations (Choir of the University of Macerata, Polyphonic Choir City of Tolentino, Ensemble Comedia Harmonica). He was founder and president of A.R.CO.M. (Associazione Regionale Cori Marchigiani), vice-president and member of the Artistic Commission of FENIARCO (Federazione Nazionale Italiana delle Associazioni Regionali Corali). He is President of the Chorus Inside Marche Association, a member of the National Federcori. Founder and Artistic Director of the Choral Academy “Ottaviano Petrucci” in Urbino and Artistic Director of the Association Giardino delle voci in Pesaro. He holds Choral Conducting and Music Didactics Courses at the invitation of musical institutions and has often been invited to serve as a jury member in National and International Choral Singing Competitions (Arezzo, Riva del Garda, Vittorio Veneto, Praga, Foligno, Fermo). He has held Masterclasses in Choral Conducting at important foreign universities (Vienna, Granada and Astana). 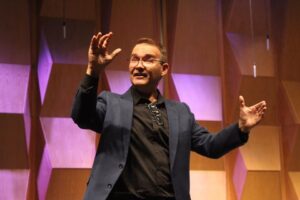 Johann van der Sandt received his formal undergraduate and post-graduate education at the University of Pretoria. He also furthered his studies in Choral Conducting in the Netherlands at the Institute of Choral Conductors training, Gorinchem (the Netherlands). He has been involved in choral work as a composer, conductor, arranger and adjudicator on national as well as international level throughout his career. In his capacity as adjudicator, conductor and lecturer, he is well sought after. Johann has conducted numerous choirs; his experience stretches wide, from working with Children’s Choirs to Youth Choirs, student’s choirs and Adult choirs. His adult Chamber choir Singkronies specifically aimed at the recording, development and preservation of South African. His work with the University of Pretoria Camerata (a mixed student’s choir) is characterized by numerous accolades. Under his leadership, the Drakensberg Boys choir established itself as one of the best boys’ choir internationally. Currently Johann is professor in Music Education at the University of Bolzano, Italy. Before that, he was professor in Choral Conducting at the University of Pretoria and served as the conductor and the Director of Music at the Drakensberg Boys Choir School, South Africa. His research interests are focused on the Multicultural Perspectives in Music Education, Social Capital Benefits of Choral Singing, Youth/Children Choral Singing, Music education teachers. 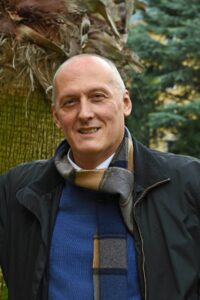