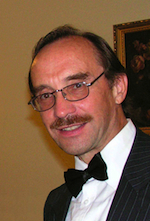 Anatoly Kiselev, President of the Jury, (b. 1948 in Moscow) is well known today as a composer, public figure, journalist and teacher. He trained originally in the Moscow Choir School in the boys’ choir under Alexander Sveshnikov, then in the Moscow State Conservatoire (graduated in 1970). He was mostly influenced by his teacher, professor of the Moscow conservatory, Alfred Shnittke. Kiselev writes symphonic, chamber and sacred music, cantatas, oratorios, as well as electroacoustic, vocal music, and music for cinema and children. In 1989, along with E.Artemiev, he organised the Russian Association for Electroacoustic Music (AEM). Vice president of AEM of Russia, represented AEM of Russia in General Assemblies of ICEM in Stockholm (1991), Madrid (1992), Oslo (1993) and Geneva (1994). Founded in 1990 in Moscow “Laboratory for electronic and computer music”, of which he was the Director (till 1998); member of Board the Union of Composers of Russia. He has written numerous articles for various journals and magazines about problems of electroacoustic music and written broadcasts at Radio-Moscow. Former Editor in Chief of the journal on electronic music in Russia – “Music for Synthesizer”. His music in various genres have been successfully performed in numerous festivals, concerts and broadcast in many countries.

Born in Altamura (Ba) in 1965, Carmine Catenazzo, member of the Jury, graduated with honours in Organ and Organ Composition and harpsichord at the Conservatory of Music “E. R. Duni “of Matera where he also studied piano and composition. At the same Conservatory he received with honours the Second Level Academic Diploma in Conducting. He attended organ courses with Endre Viragh, Luigi Celeghin and Klemens Schnorr and choral conducting courses with Bruno Zagni. His varied and intense concert activity includes concerts both as a soloist and organ continuo, harpsichordist, piano accompanist, directing choirs and orchestras. Concerts include: two Italian tours with the Choir of the University of Saarland (1995) and the Bach – Choir of Bonn (2009); organ concerts in Germany, in the cities of Klarenthal, Dillingen and Saarbrücken; director of CD recorded by Gabrieli Ensemble and Basilicata Region “Authors from Lucania between 800 and 900″; conductor CD “Weke” (Velut Luna, 2010) of works by Vincenzo Cipriani; Master Trainer Lyric Choir of the province of Potenza, with Luis Bacalov and the Orchestra of the ICO Magna Grecia; conductor with the Opera Season Festivallatilla Casamassima (BA); harpsichord concert at Carnegie Hall with the Chamber Orchestra of the Conservatory of Music E. R. Duni directed by Daniele Belardinelli; conductor of the Symphony of the Eucharist by Armando Pierucci in Jerusalem (Garden of Gethsemane) broadcast around the world on 17 Christian channels. He has worked as chorus master with Piero Bellugi, Nicola Samale, Vincenzo Perrone, Nicola Ventrella, Vito Clemente, Jürgen Böhme, Luis Bacalov and Rino Brown. He is the Artistic Director of Matera Pholiphonic Association “Pierluigi da Palestrina” and for over 20 years Master of the Choir, with wich he performed many concerts in Italy and abroad, and produced two CDs distributed by Edizioni Paoline. He is Artistic Director of the National Choral Competition “Antonio Guanti” of Matera. He teaches at the Conservatory of Music “Egidio Romualdo Duni” of Matera. 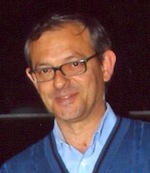 Born in 1956, Fedele Fantuzzi, member of the Jury, graduated in clarinet, band instrumentation and score reading at Parma’s “A. Boito” conservatory. Former teacher of clarinet, ensemble music, theory and solfeggio and orchestra conducting at the “C. Merulo” music school in Castelnuovo Monti (Reggio Emilia), now a Music Specialist School. He studied orchestral conducting at the conservatory of Conegliano Veneto with Ludmil Descev conductor of Sofia State Opera, attending the specialization course at Feltre, obtaining a diploma of merit. Frequent guest conductor of the “Amadeus” orchestra of Reggio Emilia, the Sofia chamber orchestra (Bulgaria) and the Italian Youth Orchestra, and at the festival of Saludecio, the Ovada international piano contest. He has also worked with the “Europa Galante” ensemble. Since 1973, he has been the director of the “La Baita” choir of Scandiano (Reggio Emilia), with which he has released three CDs, and since March 2006 has been Chairman of the AERCO (Emilia-Romagna Choir Association). He has received awards for his research, study and harmonization work on the traditional heritage of Emilia Romagna: “Caravaggio”(Bergamo), “Venendo giù dai monti” (Piacenza) and “M. Fontanesi” (Toano-Reggio Emilia). He is frequently invited to be a panel member at the most important national choir contests. He has written several choral harmonizations, which are a permanent part of the repertory of many Italian amateur choirs. He has constantly devoted himself to music teaching in schools and in the choir world. 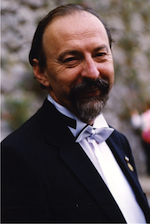 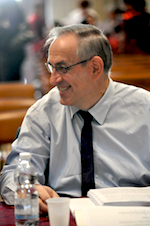 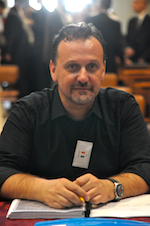 Fabio Pecci, member of the Jury, born in Rimini,  he studied violoncello at Ravenna’s officially recognized “G. Verdi” Music School graduating with brilliant results. As a cellist  his busy concert activity has led him to perform in theatres and concert halls in Italy and abroad. Awarded in many competitions, he recorded seven cds for Tactus, Bongiovanni and other labels. He founded and directs “Le Allegre Note” treble voice choir and “Note in Crescendo” youth choir, with which he has also performed in prestigious theatres. With these two choirs he has over 400 performances, audio and television recordings to his credit. With them he also recorded 3 albums which include his own choral arrangements. With “Note in Crescendo” he has held concerts in Berlin, Saint Etienne (Lyon) and in Czech Republic. With Le Allegre Note he also took part in the production of Te Deum by H. Berlioz, held in Bologna in October 2008, under the direction of Claudio Abbado, and was responsible for the preparation of the treble voices in Puccini’s Boheme. Treble voice trainer and chorus master for the Tosca staged for the 2010 New Year in Rimini, he was responsible for the treble voices in the production of Bizet’s Carmen in many theatres, as well as for Carmina Burana by C. Orff, with the soloists of the Academy of Santa Cecilia in Rome. An enthusiast of children’s vocalism, he also directs the activity of Rimini’s “Piccole Voci di Carla Amori” and “Una Canzone per Crescere” at Valconca Comprehensive School. As choir director, he has received awards and gained recognition in National and International Competitions. From 2013 he is a member of the  Artistic Committee of A.E.R.CO – The Regional Choirs Association.