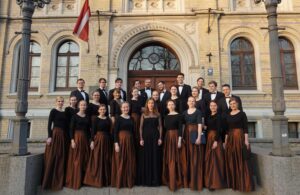 Latvian University Mixed Choir Dziesmuvara was first established in 1925. Ever since, it has been one of the leading University choirs in Latvia giving concerts in Latvia and abroad. Due to restrictions and censorship that the Soviet Regime brought in the 1940s, Dziesmuvara’s activity in Latvia was put on hold. The choir rebirthed in 2000 and has been active since. Consisting of enthusiastic university students and graduates, the choir regularly performs in Latvia, takes part in the renowned Latvian Song and Dance Festival and gives concerts abroad in countries such as Poland, The Czech Republic, Germany, France and others.  Dziesmuvara takes part in international competitions such as Prague Cantat (2013) Varsovia Cantat (2015), and Silver Bells (2015 and 2017) earning special prizes and diplomas. Since 2018, Dziesmuvara has initiated a new singalong movement ChoirUp, which consists of events that bring together people who wish to sing in a free and unconstrained setting.

Interschool Female Choir at Secondary School no. 3 in Bialystok was founded in October, 2004. It started out as a mixed choir and after two years, in September 2006, was transformed into a female one. The choir performs not only in Bialystok but also in the rest of the country. Moreover, it is a successful participant of numerous music contests and festivals. The choir’s high quality has repeatedly been acknowledged and appreciated both by juries of competitions taking place in Poland, as well as those based abroad. In 2021 the choir won the Grand Prix, a Special Prize for the best performance of a piece written by a Poznań-based composer, a Special Prize granted by the Informal Jury, the members of which were Postgraduate Students of Choral Studies and Vocal Pedagogy from The Feliks Nowowiejski Academy of Music in Bydgoszcz during the Stefan Stuligrosz Grand Prix of Polish Choral Music competition in Poznań. The choir inspires many Polish composers of the youngest generation to create new pieces that are later premiered and performed by the choir. 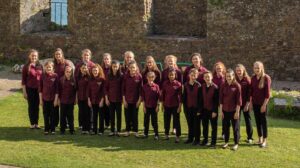 From Jersey in the British Channel Islands, The Musical Originals Singers perform contemporary, a capella, classical repertoire, including music composed specifically for young voices but which is nonetheless challenging and artistically rewarding. The Choir’s age range is 10 to 18 and is open to all, the only requirement being a love of singing to a high standard and a commitment to hard work. Under its founder and conductor, Imogen Nicholls MBE, the Choir has achieved much success internationally over the last decade. This includes, in 2017, being finalists in the European Broadcasting Union’s Let the Peoples Sing competition at Helsinki and giving a live BBC concert to mark that achievement. This is the Choir’s fourth visit to the Rimini International Choral Competition. The Choir performs regularly in Jersey, including at the annual commemoration of the Island’s liberation in 1945 from wartime occupation – Jersey’s national day, 9 May. All its members are proud to be representing their small island country today. 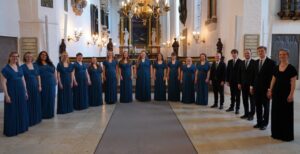 Nordisk Vokalensemble is an equal voices choir founded in 2019 and is based in Randers, Denmark. The choir is mostly experienced in the newer Nordic repertoire, as the name suggests, because the choir has as special focus on that kind of sound. The choir consists of 18-20 active female and male singers. The male singers are placed in the alto section which contributes to the choir´s unique sound. Nordisk Vokalensemble has been performing since its founding and recorded a handful of works in the autumn of 2020. The choir was originally founded by singers from the former Sct. Peders Ungdomskor, which was conducted by the late Karsten Blond, the organist of Sct. Peders Church in Randers. Blond created a unique choral tradition that lives on in Nordisk Vokalensemble. Vibeke Bonde Persson was chosen as the conductor for the choir in 2019. She finished her Master´s degree in classical piano from The Royal Academy of Music, Aarhus, in 2016. Shortly hereafter she started working as an organist, and has been a choir conductor since 2018.

Girls’ Choir of Conservatoire of Music and Ballet – Maribor – Slovenia

The Conservatory of Music and Ballet Maribor was established in 1945. As one of the first ensembles, a girls’ choir was created shortly afterward. The choir changed back and forth from girls to a mixed choir multiple times but since the young conductor Peter Novak Smolič took over, both choirs coexist. The choirs have competed a lot in the past and received numerous awards. In 2012, when Maribor became the European Capital of Culture, over 100 students performed a new piece »Funeral at the Holy Cross« for a symphonic orchestra and a choir by Robert Kamplet, a Slovene composer. Together with the Orchestra of the University of Vilnius, they performed Rheinberger’s Stabat Mater at the Lent International Summer Festival in Maribor in June 2019. A few months later, in September 2019, they gave another memorable performance of Carl Orff’s Carmina Burana in Varaždin (Croatia) and Maribor (Slovenia). Additionally, during the lockdowns in the past years, the choir made significant virtual recordings, which were used at noteworthy cultural events in 2021, when Slovenia held the Presidency of the Council of the EU.