16:30: Meeting with the Jury for the Conductors (City Museum)

The ‘secular venues’ of the Competition:

Teatro Amintore Galli is the Municipal Theatre of Rimini. The construction began in 1843 and it was opened in 1857 with the opera “Aroldo” by Giuseppe Verdi. In the origine the theatre was called “Teatro Nuovo” (the New Theatre) and it changed name in 1859 to Teatro Vittorio Emanuele II. Only later, in 1947, it was entitled to the composer Amintore Galli (1845-1919). The project (1841-43) was signed by Luigi Poletti, who was an architect and engineer of the Papal States. The six originale tables of the project, which he submitted 29th January 1842 in Rimini, were lost during the earthquake 1916. However, there are 6 photographs (by Luigi Perilli) dating back to 1900 and five watercolor drawings of the original design. The last performance of the original theatre dates back to the spring 1943 because, afterwards, much of the building was destroyed by the Second World War bombings. The apse and the roof were collapsed, and about 90 percent of the auditorium and the stage were destroyed. The only part that remained almost undamaged is the foyer. Luigi Poletti designed the Municipal Theatre of Rimini as a temple of music. He was inspired by the solemnity and magnificence of Roman temples and proposed a innovative style; a monumental building in a classic architecture (greek-roman), which distinguished the theatre from others in Europe in that period. The auditorium with the stage and the gallery contained more than a thousand seats. If a restoration was partly realized between 1997 and 2001, in 2010 the Municipality has programmed a complete reconstruction of the theatre remaining as much as possible faithful to the original scheme although respecting the new security rules. The restoration project and the philological and typological study of the theatre are under the Supervision of the regional Superintendence for Archaeological Heritage and Cultural Activities of Emilia Romagna. The restoration works, started in 2014, reached the first important step on 17th September 2015 with the opening of the foyer of the theatre. On the occasion, after 158 years, the piano played by Giuseppe Verdi during the opening of the Theatre Galli in August 1857, came back to Rimini and once again was played during the opening cerimony. On October 28, 2018 the Galli theater reopened its doors after 75 years and it is ready to become again the place of great music. The restoration work have provided an exceptional opportunity for Archaeological excavations that have affected the areas below the auditorium, the orchestra pit, the stage and the side rooms that overlook the square and via Poletti. Owing to of the important archaeological finds, now the restoration project also includes the enhancement of part of the structures found underneath the pit and a multimedia museum. 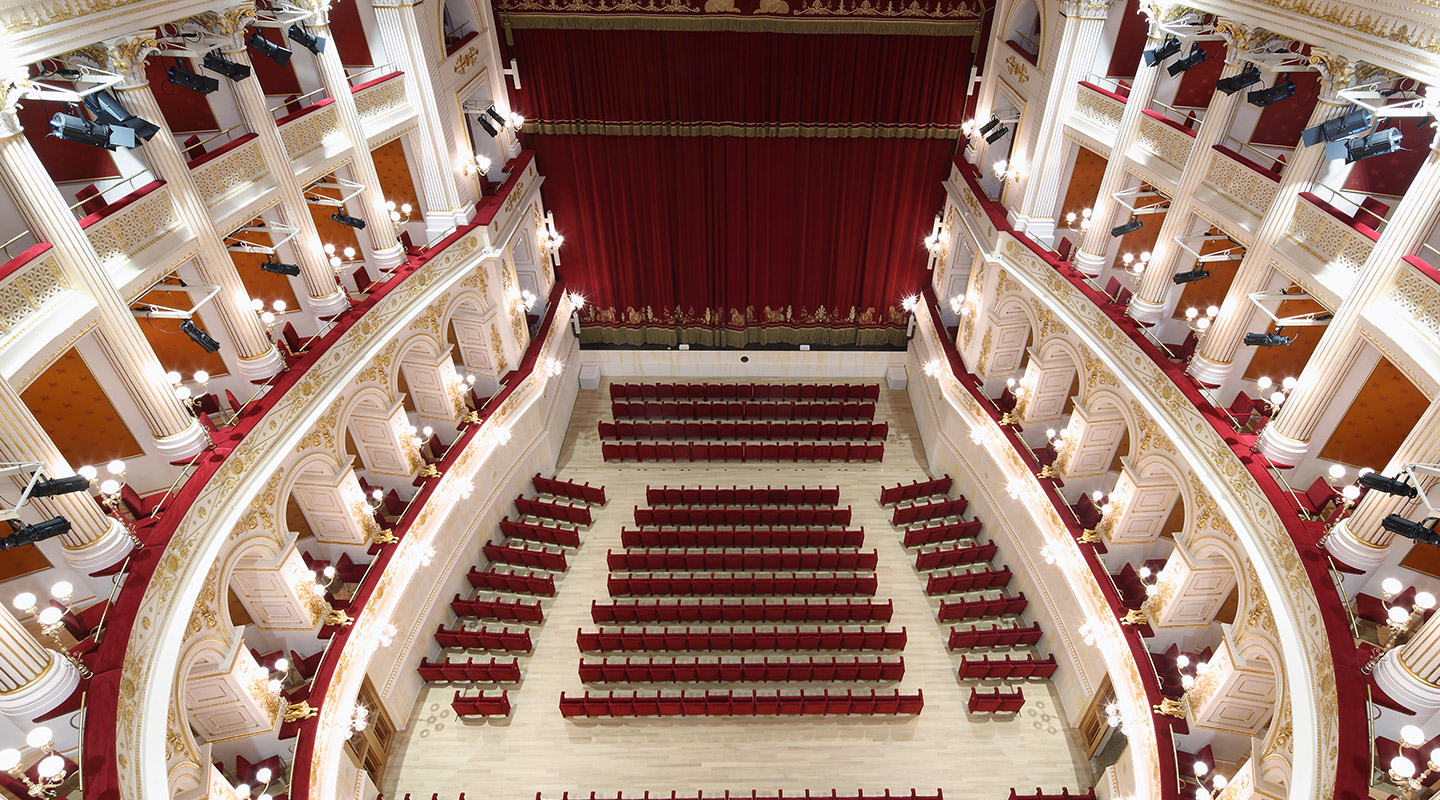 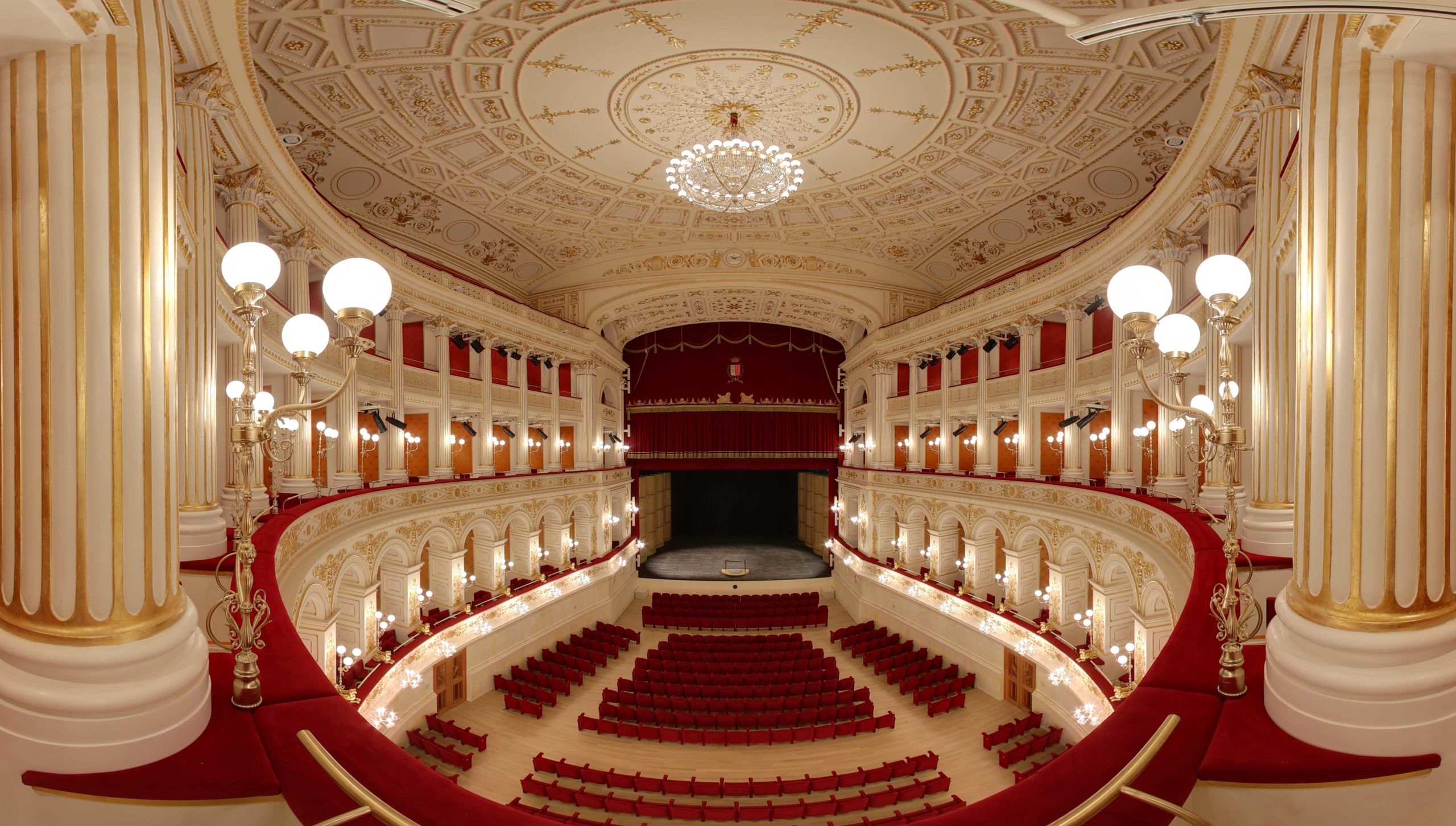 The Atti Theater is located in the historic center of Rimini, in the vast building complex of the former Agostinian Monastery, built near the church constructed around 1069 and dedicated to St. John the Evangelist but which, granted in 1256 to the Hermits of St. Augustine, it became for all, the church of St. Augustine. Among other things, the Augustinians had the happy intuition of entrusting the execution of a cycle of frescoes in their great church built from scratch to the local pictorial school, recognizing the value of what would later be and defined and appreciated as the “Rimini school of the 13th Century “. Giovanni from Rimini, considered the leader of the 13th Century Rimini area, lived in the district of San Giovanni Evangelista, that is, of St. Augustine. The former convent of the Augustinians, partially rebuilt in the 16th century and rebuilt again after the damage caused by the 1786 earthquake by the architect Giuseppe Achilli, is characterized by its large size, the sobriety and the balance of the architecture and the presence of large courtyards. The Atti Theater was inaugurated in 2001 and takes its name from Isotta degli Atti, lover and wife of the famous Sigismondo Pandolfo Malatesta (1470-1468). It is a modern theater with no curtain with over 280 seats, between the stalls and the gallery. The special features: the stalls are mobile, has no fixed seats and can also be used as a stage. The stage in turn, can be extended towards the stalls, in order to allow the performance of the most different types of shows adapting to different scenic uses in an environment that, with the use of a porous stone and cherry wood, ensures excellent acoustic performance. 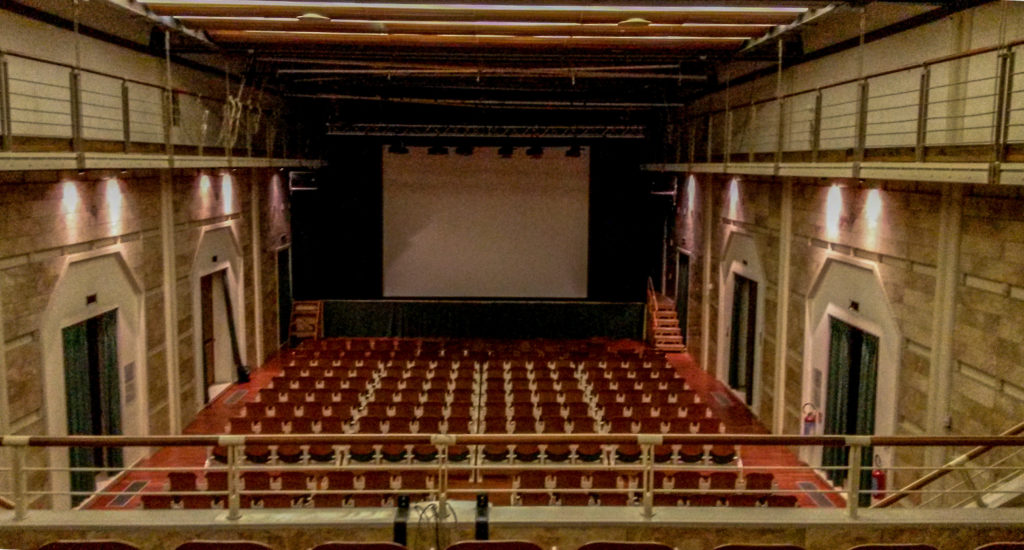 The ‘sacred venue’ of the Competition

At the beginning of the XIV century the Malatesta family donated some properties within the city of Rimini to the Servants of Mary who built a first chapel. A few years later the friars decided to expand their church by building a larger one, of which today you can see the side along the main street, Corso d’Augusto. The church was a single nave, inside there were numerous altars and works of art, the apse area was characterized by three chapels with the central one of greater dimensions. The right side chapel had been built by the noble family of the Agolanti, to whom we owe the coat of arms in a pilaster on the side of the church, of the mid-fourteenth century. Between 1774 and 1777 the church and the convent were renovated according to a design by the Bolognese architect Gaetano Stegani (1678-1777); Antonio Trentanove worked as a plasterer and plasticist. In 1798 the Order of Servites was suppressed and the convent passed to the Dominicans who had been transferred from their convent San Cataldo. The Dominicans brought many works of art belonging to their previous headquarters but their order was revoked in 1799. Since 1806 the church has been a parish of Santa Maria in Corte. In 1885 the parish priest Don Ugo Maccolini established the Pious Work of the Rosary and thanks to the funds collected with it, he was able to reconstruct the façade of the church built in 1894 to a design by Eng. Giuseppe Urbani (1861-1937), rebuild the upper part of the bell tower and decorated the interior of the church with gilding made by Luigi Samoggia from Bologna.