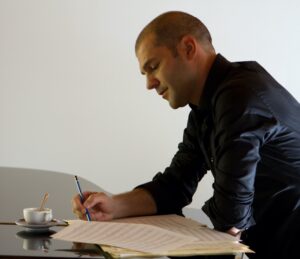 A graduate in Pianoforte, Conducting, Choral Composition and Didactics, Giorgio Susana has an intense concert activity in Italy, France, Slovenia, Croatia, Austria, Germany, Argentina, Taiwan and Japan, in prestigious concert halls and festivals. He is pianist in several chamber ensembles and accompanist pianist for opera and pop/jazz singers. He has always supported teaching activities and the growth of young people through singing and music. He is the founder and current conductor of the youth orchestra OrcheStraForte, and of other youth choirs and orchestras. He is also conductor of the Corocastel male choir with which he performs an intense and fruitful concert activity and with which he has won numerous competitions and prizes. He composes Choral and Instrumental Music, Oratories, Musicals, Songs. His compositions and arrangements are not only performed in Italy but also regularly in various countries around the world by prestigious choirs conducted by renowned masters. He has received awards in numerous national and international competitions as Composer and Conductor and prestigious career prizes. He teaches Harmony Theory and Analysis at the Conservatorio “G. Tartini” in Trieste and Choral Composition and Arrangement at the Accademia per Direttori di Coro “A.E.R.Co”. He is artistic commissioner of A.S.A.C. Veneto, of the Concorso Corale Nazionale di Vittorio Veneto, of A.N.D.C.I. and artistic director of the international choral composition competition Bondì cara Venezia. It is published by Alliance Music Publications (Houston, U.S.A.), PanaMusica (Tokyo), ICOT edition (Japan), Sonitus Music Editions, Feniarco, Asac Veneto and Usci F.V.G. 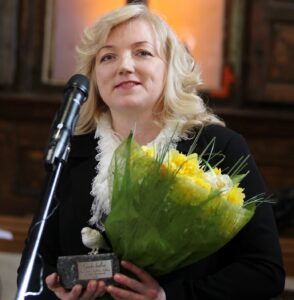 Aira Birzina has been the conductor of the Riga Cathedral Girls’ Choir Tiara since 2000. She is one of the most outstanding conductors in Latvia who works mostly with female choirs and teaches choir conducting at the Jāzeps Vitols Latvian Academy of Music. She has been the principal conductor of the famous Latvian female choirs Dzintars and Rasa for many years. Aira Birzina is also one of the conductors of the Latvian Song and Dance Festival. She leads various workshops, participates in conferences and works as a jury member at the international choir competitions in Latvia and abroad. She was awarded with the Acknowledgement of the Cabinet of Ministers of the Republic of Latvia in 2018, the Order of the Three Stars and the Culture Prize White Sparrow of the Riga Municipality in 2015, the Annual Culture Prize of City of Ogre in 2017 and 2018, and the Ministry of Culture’s Prize in Folk Art in 1999. Aira Birzina is an energetic and fascinating leader, inspiring her singers always perform at their best. She cherishes the traditions of her teachers, the great Latvian choir conductors Janis Lindenberg, Edgers Račevskis, and Imants Kokars, and passes this knowledge to her students at the Academy of Music and the Riga Cathedral Choir School. Under Aira Birzina’s leadership, the choir Tiara has won several international competitions and prepared many wonderful concert programmes, growing from an ensemble of a few singers to one of the most prominent and most attractive choral collectives on the Latvian concert stage. 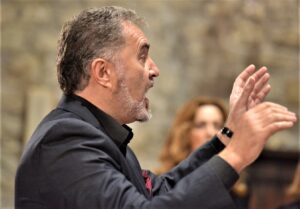 Eugenio Dalla Noce began his musical studies at a very young age thanks to the parish priest in the church of his small town, Don Antonio Bacci, later graduating in Pianoforte at the Conservatorio Morlacchi in Perugia in parallel with his high school studies. In addition to piano specialisation courses with Maestro Orazio Frugoni in Florence, he attended courses on the Nuova Didattica Musicale del Cantar leggendo by R. Goitre at the Abbey of San Colombano in Bobbio. He participated in 2006 and 2007 in the European Choral Project Open to Every Citizen at Vilnius University, Lithuania. He has attended on several occasions the master’s degree Course on Choral Music for Conductors Voci del Novecento organised by the Tuscany Choir Association with internationally renowned teachers. He graduated as Choir Conductor at the Higher School for Conductors of the Fondazione Guido d’Arezzo, studying, among others, with Maestros Lorenzo Donati, Walter Marzilli, Luigi Marzola, Romano Pezzati, Roberto Gabbiani, Peter Neuman, Nicole Corti, Peter Broadbent, Gary Graden. He participated in Warsaw in March 2018 in the European Artistic Directors Development Upskilling Project for Choral Educators. He has been collaborating for more than 20 years with various primary schools in the province of Arezzo as an external expert in annual choral projects. He attended the two-year course organised by the Tuscan Choir Association and the Regional School Office Un Coro in ogni Scuola in 2010. A member of the Artistic Commission of the Tuscan Choir Association, he conducts: the female Ensemble Kastalia of Arezzo, the male polyphonic choir Sardos In Su Coro of Colle val d’Elsa (Siena), Eva Ensemble of Arezzo, the Vox Cordis Children’s Choir of Arezzo. He holds the Chair of Music and is the contact person for musical activities at the Istituto Comprensivo Martiri di Civitella, Badia al Pino – Arezzo, where he created the Institute Choir Arcobaleno and the Institute Teachers’ Choir.

Maria Emma Meligopoulou is Assistant Professor of Choral Conducting in Macedonia University of Thessaloniki School of Music Science & Art (Greece), where she teaches choral conducting techniques and directs the University choirs. She also teaches in the master’s program of Macedonia University and is visiting Professor at Aegean University. She is also, organizer of the Choral Conducting Summer Academy in Ionian University. She holds a Master Degree in Choral Conducting from Boston University CFA and a PhD and a Post-Doctoral Diploma in Choral Conducting and Choral Pedagogy from Ionian University SFA. She also holds a Bachelor Degree in Law, from Aristotle University of Thessaloniki. In 1992 she founded and directs the SS. Cyril & Methodios Choir of Thessaloniki, the largest choral organization in Northern Greece, which cerebrated its 30th anniversary this year with over 250 singers at the ages of 6 – 25 years. She has performed numerous concerts in Greece, Europe, Asia, Africa and America (USA, Canada) and is recipient of many international distinctions as choral conductor. Dr. Meligopoulou is International lecturer on demand, adjudicator and guest conductor in Greek and International festivals (China, USA, Canada, Italy, Germany, Turkey, South Africa, Indonesia, Israel e.tc). She is also author of the textbooks Introduction to the Art of Choral Praxis (2011 & 2013 & 2022 7th edition), and Choral Method for Young Singers and has also published the score editions 42 Choral Works by Greek Composers for Equal Voices (2014), and Choral Music for equal voices (2022) both available by Nakas- Papagregoriou Editions, Athens. She is also the author of the electronic book Choral Art in History, Theory and Praxis (2022) which is in the reading list in all five Schools of Music University Departments in Greece. 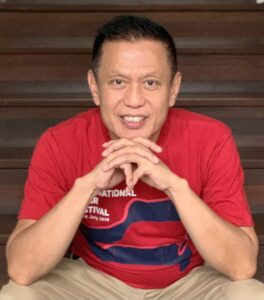 Tommyanto Kandisaputra is the Founder and Artistic Director of Studio Cantorum Bandung Choir & Orchestra since 1991 and Bandung Choral Society which has been organizing concerts, choir training, competitions and Choir Symposiums since 2000. He is also the Artistic Director of the Bali International Choir Festival in Denpasar which is held annually successfully since 2012 until now. Previously, successfully held the North Sulawesi International Choir Competition 2008 in Manado, Tomohon International Choir Competition 2009 and 2010 in North Sulawesi, Rhapsodie Indonesia Choir Festival (2019), Jakarta World Choir Festival (2019) and Bandung Choral Festival in collaboration with Parahyangan University Bandung and the National Narcotics Agency of the Republic of Indonesia on 28-31 March 2022. Tommyanto has also been elected as a member of the World Choir Council and Leader of INTERKULTUR Indonesia since 2006 and has brought many Indonesian Choirs to perform on various international stages and competitions with great success.  Became Artistic Director of the 1st Asian Choir Games, November 2007, in Jakarta, and as a judge in World Choir Games in Xiamen-China 2006, Graz- Austria 2008, Shaozing-China 2010, Cincinnati-USA 2012. In 2014 he became the representative of Indonesia at “One Asia Cultural Ambassador” held by “The Music for One Foundation”, South Korea.  Then became the Conductor of the Taipei Philharmonic Youth Choir on May 4, 2016, performing at the National Concert Hall in Taipei, Taiwan.  He was a speaker at the Asian Pacific Children Choir Assembly in Okinawa, December 2016, and The Summer Academy of Lithuanian Conductors in Vilnius, Lithuania, August 2017. He was a judge at the Suwon Choral Festival and led a Workshop at the Jeju Senior Choir Festival – South Korea, the Claudio Monteverdi International Choral Festival in Venice, October 2019 and The Busan International Choral Festival in October 2022. He is a singing teacher and leads many Choir Development Programs for Singers and Conductors by doing seminars and workshops all over Indonesia.

This website uses cookies to improve your experience while you navigate through the website. Out of these, the cookies that are categorized as necessary are stored on your browser as they are essential for the working of basic functionalities of the website. We also use third-party cookies that help us analyze and understand how you use this website. These cookies will be stored in your browser only with your consent. You also have the option to opt-out of these cookies. But opting out of some of these cookies may affect your browsing experience.
Necessary Sempre abilitato
Necessary cookies are absolutely essential for the website to function properly. This category only includes cookies that ensures basic functionalities and security features of the website. These cookies do not store any personal information.
Non-necessary
Any cookies that may not be particularly necessary for the website to function and is used specifically to collect user personal data via analytics, ads, other embedded contents are termed as non-necessary cookies. It is mandatory to procure user consent prior to running these cookies on your website.
ACCETTA E SALVA